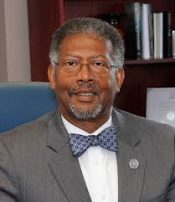 Dr. Thomas Conway Jr. served the UNC System for 45 years, 32 of which were spent at N.C. State in various capacities, including Vice Provost for Enrollment Management and Services, and Associate Vice Provost for the Division of Undergraduate Affairs. He not only served at Fayetteville State University as Vice Chancellor and Chief of Staff, but also as Chancellor of ECSU, where he oversaw the restructuring of policies and departments to the benefit of the University. A good bit of Conway’s career was spent alleviating concerns raised through internal audits and external reviews, expanding the value of the University through new academic programs, establishing bilateral agreements with other colleges, developing school value through branding, overseeing investments, and increasing enrollment. Conway sits on several boards and has consulted for numerous historically minority institutions. He has written and spoken widely about academic assessment and leadership.